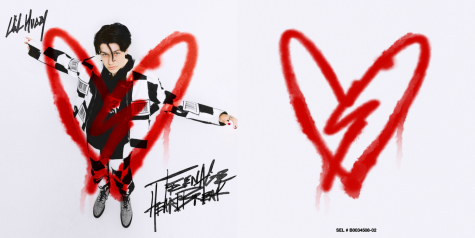 The new album “Teenage Heartbreak” is TikTok and social media personality Chase Hudson’s, also known as Lil Huddy by his fans. The album includes previously released singles “21st  Century Vampire,” “The Eulogy Of You and Me,” “America’s Sweetheart,” and “Don’t Freak Out” featuring Iann Dior All-American Rejects’ frontman Tyson Ritter and Travis Barker, and eight more brand new tracks. Teenage Heartbreak is a punk anthem album distinctive from Lil Huddy’s iconic conveying a desire for the authentic post-internet adolescent experience. Chase initially gained traction on social media platforms like Vine and Dubsmash; however, his fame exploded on the short-video sharing app called TikTok. His social media presence has earned him an opportunity to try his hand at music, and fans couldn’t have been more excited.

I want first to discuss the negatives of the “Teenage Heartbreak” project. The album, unfortunately, suffers most in its lyrics. The lyrics come off as cringy and very teenage-esque. However, I take this with a grain of salt because the album is a punk-anthem-based project, so the corniness of the teenage experience is to be expected, and it fits the overall theme quite well. With that being said, I don’t see myself enjoying the album or any of its tracks over the large majority of music that hundreds of millions of other people and I have grown up listening to.

On the other hand, I can say with certainty that I would enjoy the album over many other projects that have come out recently by other artists. The album features a

very punchy drum and guitar mix, combined with Huddy’s vocals that convey the pop-punk atmosphere excellently. Huddy is joined on the project by outstanding artists such as Travis Barker and Iann Dior. The dynamics between the young Lil Huddy and these musical geniuses are exhilarating to listen to.

Overall, I can say that “Teenage Heartbreak” is a promising debut album for Huddy. It isn’t anything outstanding that will top the charts; however, the project nails the punk-anthem theme and is a fascinating album to listen to if given a chance. Huddy’s presence on TikTok and other social media platforms will help boost the album to some newer audiences. Huddy has a very fulfilling music career ahead, and he has proven his versatility on his debut album.